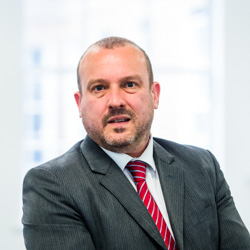 Steven has developed a successful practice encompassing Insurance fraud, credit hire litigation, personal injury litigation and costs. Steven is known for his robust, yet friendly, approach to litigation.
Steven joined the bar in 2011 having previously qualified as a Solicitor in 2005. Steven has experience in Road Traffic Accidents, Employers Liability and Public Liability Claims. He deals with high value personal injury claims involving significant loss of earnings claims. He also specialises in, and particularly enjoys, road traffic accident cases involving “Low Velocity Impact” allegations.
Steven has a particular specialism in credit hire fraud cases, and his vast experience (and market knowledge) in the credit hire field assists with claims of this nature. Steven has a forensic eye for detail which he deploys specifically in cases involving allegations of fraud.
Steven’s costs background makes him particularly suited to arguments regarding costs when a Claimant is found to have been Fundamentally Dishonest.
Steven has extensive experience of conducting trials, applications, case management conferences and appeals in the Civil Courts and has acted for many of the countries leading Credit Hire Organisations and Insurers in relation to fraud matters. He has previously provided fraud training and also ways happy to do so.
Notable cases include:
- Steven is representing insurers in ongoing cases involving fraud rings.
- The Claimant was a taxi driver claiming over 35,000.00 of credit hire charges. There were a number of issues raised in the Defence including, LVI, phantom witnesses and the veracity of the credit hire company. The claim was dismissed. As a result, the credit hire claim was dismissed. QOCS protection was disapplied and the Claimant was order to pay the Defendant’s costs.
- The Claimant, (a rugby player) claimed for personal injuries and credit hire as a result of a road traffic accident. LVI concerns were raised in the Defence. The trial Judge concluded the Claimant had exaggerated his injuries and found him to have been Fundamentally Dishonest. QOCS protection was disapplied, and the Claimant ordered to pay the Defendant’s costs
- The Claimant was a fitter for his employer. In the course of his employment he had fallen and injured himself. Primary liability was conceded. The case was challenged on the basis of exaggeration of his injuries. In the course of a two-day trial the Claimant was extensively cross examined. Case was dismissed. QOCS was disapplied and a costs order made. It transpired after the hearing the Claimant had no less than seven other claims in the pipeline, the judgment in Steven’s case will be used in all those cases.