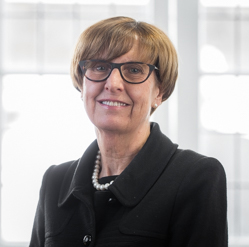 Joanne has expertise in all areas of Immigration and Nationality law and European law at all levels including the Asylum and Immigration Tribunal, Administrative Court, House of Lords and European Court of Justice.
Joanne has a varied practice within her field and is instructed by Local Authorities, NGO’s, Law Centres and Private Law firms. Joanne has a special interest in the crossover of immigration law with family law and prepares opinions for Local Authorities and Law firms for use in the Family Division.
Joanne undertakes seminars at solicitors firms and is an assessor at Central Law Training.
Joanne practices Immigration and Nationality Law and European law relating to free movement of people, business immigration and deportation issues.
From a nursing and counselling background with emphasis on mental and women’s health, Joanne’s dissertation in her LLB (Hons) focused on Judicial Review within the area of Mental Health.
Jo has considerable experience in applications using the business route, be that Investor, Entrepreneur and Tier 1 and Tier 2, either advising solicitors to make the applications and also by direct access.
As an Immigration Judge she is aware of how the Home Office and Entry Clearance Officer view these cases and the main reasons why such applications tend to be refused. She can assist to prevent refusal by paying very close attention to constantly changing complex and evolving immigration rules and guidance and making sure that all the documents are submitted with the applications.
Jo has insight and understanding of the issues facing high net worth individuals and their families who wish to enter the United Kingdom, including the current non-domicile taxation rules. She also has connections to and associations with financial institutions and wealth management companies both within the United Kingdom and off-shore.
Recommendations
“She’s absolutely excellent to work with. Her knowledge of immigration law is extensive and impressive.” “She’s amazing at dealing with the brief, and is a compassionate lawyer who fights hard. She’s also a genuinely caring barrister.”
Chambers UK 2020
“She has particular expertise in finding solutions outside of the immigration rules.”
Legal 500 2020
“She is a leading light to all practitioners. Amazingly creative and articulate - a superwoman.”
Chambers UK 2019
“She really knows her stuff and argues in a really attractive way. Her individual strength is her deep and wide knowledge in various areas of law, and her experience of handing people of various levels.”
Chambers and Partners 2018
“Accessible and will undertake legally aided work for unaccompanied minors.”
Legal 500 2018
“Routinely acts for highly vulnerable clients, including minors and individuals with mental health issues. Her broad caseload regularly sees her acting in complex immigration, asylum and nationality matters.”
Chambers UK 2017
“Very friendly and cordial while staying highly professional.”
Legal 500 2016
“Sits as a Tribunal Judge and has a wealth of experience handling nationality, asylum and EU free movement matters. She has a particular interest in cases featuring mental health issues. She is phenomenally clever and wonderfully capable. Every time there is an element of complexity of law or sensitive issues, she is the one I go to without fail.”
Chambers UK, 2016