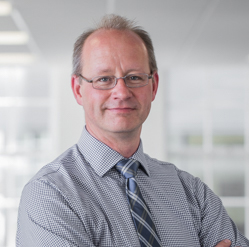 David obtained a first class degree in law from Cambridge University in 1991. He was called to the Bar in 1993, and has since developed a highly successful property law practice. He is a recognised specialist in property and landlord and tenant related matters, having been recommended for complex landlord and tenant disputes in successive editions of Legal 500, and having been identified as a leader at the bar by Chambers UK. He was formerly a Deputy Adjudicator to HM Land Registry, and was appointed a Judge of the Property Chamber of the First Tier Tribunal in 2013.
Experience
Property: Corporate and Commercial
David is regularly instructed by national developers and local authority land owners in connection with substantial property disputes. He advises upon issues affecting title as well as in connection with disputes arising out of land purchases. Opponents describe him as a ‘super advocate who is calm under fire’. Chambers UK (2011) reports that he has a ‘refined sense of the commercial imperatives of a case’, and Legal 500 (2011) refers to him as being ‘blessed with clarity of thought and fine intellect’.
Recent instructions in this area include: acting for a major high street bank in connection with a multi-million pound mortgage fraud, advising a prospective purchaser of a freehold reversionary interest in a city centre office building in connection with issues affecting title, advising a client in respect of the acquisition and registration of freehold property rights in airspace, advising a local authority in connection with an abortive conditional contract for the sale of development land, advising a local authority as to the legal effect of it’s own covenant to permit a fair to be held upon a town centre site, in circumstances in which that covenant blighted proposed development of the site, advising a national developer upon the enforceability of a variety of restrictive covenants affecting development land, and upon the best tactical approach for overcoming the restrictions created by those covenants, advising a developer in proceedings to recover a deposit following an abortive contract for the sale and purchase of a residential development site.
Property: Private Individuals
David’s experience as a Deputy Adjudicator to Her Majesty’s Land Registry and as Judge of the Property Chamber of the First Tier Tribunal means that he is able to provide invaluable advice to private individuals who are involved in property disputes. He is described as a “sensible, practical” advocate who “makes clients feel comfortable” (Chambers UK 2012), ‘charming’ (Legal 500 (2011) and a ‘cost-effective advocate who possesses great ease around clients’ (Chambers UK (2011).
His work in this area includes: boundary disputes, disputes concerning easements and profits a prendre, including rights of way, rights of drainage, rights of light, rights to the passage of electricity and fishing rights, restrictive covenants (including applications under LPA 1925 s.84(2) and applications to modify or discharge covenants), claims arising out of abortive contracts for the sale and purchase of land including misrepresentation claims and claims in contract, co-ownership claims (constructive trust and proprietary estoppel), applications for orders for sale under s.14 TLATA, nuisance claims (noise, odour, flooding and root encroachment) including group actions andmortgage fraud and subrogation.
Landlord and Tenant
David was ‘noted for landlord and tenant work’ in the 2008 edition of Legal 500, and was ‘recommended for complex landlord and tenant disputes’ in the 2009 and 2010 editions of the same publication. The 2011 edition of Chambers and Partners records that he is ‘expert’ in this area of work, and the 2011 edition of Legal 500 reports that he is ‘blessed with clarity of thought and a fine intellect’. David deals primarily with commercial landlord and tenant disputes, and is regularly instructed in connection with applications for renewal of business leases, as well as in connection with dilapidations and forfeiture claims.
David’s recent instructions in this area include: advising a PLC in connection with a dispute over the validity of exercise of a tenant’s break notice, advising a corporate tenant in respect of a substantial claim for business losses flowing from it’s landlord’s derogation from grant, acting for an estate management company in connection with a commercial dispute concerning tenants’ liabilities to contribute to service charge, acting for corporate and private landlords and tenants on contested lease renewal hearings, advising a public access client in respect of a dispute concerning the existence of an Agricultural Holdings Act protected tenancy.
Recommendations
“He is a QC in junior's clothing.” “He is assiduously prepared, and his documents are friendly and persuasive to the reader.” “He is technically careful and reliable.”
Chambers UK 2021 (Property)
“A superb advocate who is great with clients.”
Legal 500 2021 (Property and Construction)
“Excellent client skills and appreciation of issues. First class all around.” “Excellent technical ability in real property matters.”
Chambers UK 2020
‘A super brain.’
Legal 500 2019
“He’s a very calming influence in the court, never appears to be aggressive at all but gets what he needs.” “Commercially minded and gets to the heart of the matter quickly.” “The quality of his knowledge is excellent.”
Chambers UK 2017
“Professional with an excellent depth of knowledge.” “He has a strong track record of winning.” “Recommended for commercial contract disputes and professional negligence claims.” “Recommended for landlord and tenant matters.”
Legal 500 2016
“Intelligent, personable and commercial.” “He’s very knowledgeable and good on technical points.” “He’s not only knowledgeable about the law but also commercially aware.”
Chambers UK 2016