Counsel at No5 Barristers’ Chambers prosecuted in a trial which saw a lorry driver found guilty of careless driving following the death of a cyclist.

John O’Higgins led the prosecution in the trial of Joseph Large, 30, of Mount Road, Wolverhampton, at Stafford Crown Court.

Large was found guilty of causing the death of Paul Thompson, 50, by careless driving with the jury returning a unanimous verdict. The court heard that Large tested positive for 158 micrograms of cocaine in his blood at the roadside.

Mr Thompson, from Bilston, was pronounced dead at the scene after being hit by the 32-tonne refuse lorry near East Park, Wolverhampton, in November last year. The court heard that Large pulled out of Hickman Avenue into Culwick Street when Mr Thompson cycled past the junction.

Mr Thompson, who was wearing a bright fluorescent yellow helmet and backpack, had the right of way. He suffered head, spinal, chest and abdominal injuries.

The court heard that Large told the police he had had difficulty seeing due to bad sunlight.

John O'Higgins told the court said: "The collision was caused because Mr Large failed to give way.

"An expert reconstruction has confirmed Mr Thompson was there to be seen for eight seconds before the collision. Apparently, Mr Large told police, during an interview, that he stopped.

"He didn't - but turned into the road without stopping. It is that which caused the collision with Mr Thompson.

"The prosecution says he should have adequately looked around his mirrors if he couldn't see properly.

"He shouldn't have pulled out without taking a proper look to his left - particularly if the sun was preventing him from seeing clearly."

Large was granted bail and will be sentenced on a date yet to be confirmed.

To read more about the trial, visit: https://www.expressandstar.com/news/crime/2019/12/12/lorry-driver-found-guilty-of-causing-cyclists-death-in-wolverhampton-crash/

John O’Higgins is a member of the Crime group at No5 Barristers’ Chambers. To view his profile, visit https://www.no5.com/people/barristers/john-o-higgins/ 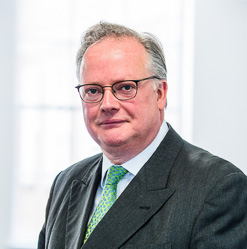