KXC And Others V University Hospitals of Leicester NHS Trust

Jonathan Jones QC and Mamta Gupta, successfully settled an oncological case in April 2020 in which the Defendant NHS Trust agreed to pay a Periodical Payment Order in a Fatal Accident Act claim to a disabled dependent for the first time.

The case relates to a failure to diagnose HER2 positive breast cancer in a 37-year-old lady in December 2008/January 2009.  The Deceased had a husband and 7 children under the age of 19.  One of these had severe learning disabilities and required 24-hour care.

Following a referral to the Defendant’s hospital with a change in texture of her right breast, the Deceased was investigated by way of a mammogram, ultrasound and skin biopsy with a follow-up MRI scan.  At the time, the Deceased was reassured that there was nothing serious.

The Deceased remained relatively well until January 2011 when she presented with swelling and oedema in the right breast.  Investigations were carried out leading to the diagnosis of breast cancer with lymph node and lung metastases.

The Deceased underwent treatment including chemotherapy however her condition deteriorated, and the cancer spread to her skull, lungs and brain.  In March 2013, the Deceased was discharged with terminal care at home. She died on 20 May 2013.

A letter of claim was served alleging that there was a failure to identify microcalcifications on the mammogram and further, correctly interpret the MRI.  Further follow-up by way of biopsy would have revealed pre-invasive cancer with no metastases. With appropriate treatment, the Deceased would have survived and lived a full life with a normal life expectancy.

Quantification of the claim was challenging and complex.  At the time of her untimely death, the Deceased was survived by her husband [the Second Claimant] and 7 children [the Third to Ninth Claimants].  The First Claimant was the Deceased’s sister.  The Second Claimant suffered from epilepsy and one of the children [the Sixth Claimant] had severe autism and would have required round the clock care for the rest of his life.  Such care would have been provided mainly by the Deceased for the rest of her life.

The Claimants claimed for the usual heads of loss under the Law Reform (Miscellaneous Provisions) Act 1934 including the prolonged period of pain, suffering and loss of amenity which the Deceased had endured as well as the care which she received.  A significant loss of services claim, up to the date of death was also made for the loss of the care the Deceased would have provided to her family and the household but for the negligence.   The claim under the 1934 Act came to just under £185,000.

The Sixth Claimant claimed a significantly higher Regan v Williamson award.  Past and future loss of services in the sum of £3.875m was claimed on the basis that in order to replace the Deceased’s care, a substantial commercial care package was required involving employed carers and case management until the Deceased’s 80th birthday.

The Sixth Claimant also claimed future case management costs and, since he was a protected party, Court of Protection costs were claimed at just under £850,000.  The Schedule of Loss totalled over £6m.

Case management and Court of Protection costs were objected to on the basis that the Sixth Claimant would not have received those services from the Deceased in any event.

A round table meeting took place on 20 April 2020 not long after the potential impact of the pandemic was being realised. The case settled shortly afterwards.

In its Counter Schedule the Defendant was initially resistant to a PPO.  However, following negotiations, the final settlement included a lump sum of £650,000 and periodical payments for care and case management of £32,599 per annum until the Sixth Claimant reached age 19 and £52,599 per annum until the Deceased’s 75th birthday, or the Sixth Claimant’s death, whichever was the earlier.  The parties also agreed an annual periodical payment of £7,401 for Court of Protection costs index linked to RPI on the same terms.

This settlement was approved by His Honour Judge Hedley sitting at Leicester District Registry on 3 July 2020.

At a time when there was a threat of a world recession due to the COVID 19 pandemic, this form of award had the advantage of securing guaranteed index-linked periodical payments to fund the Sixth Claimant’s loss of dependency until the time he would be expected to go into Local Authority Accommodation.  A guaranteed income was the main priority for the Sixth Claimant’s family and outweighed the traditional advantages of flexibility which a conventional lump sum offers and any windfall to the Sixth Claimant’s beneficiaries in the event of an early demise.

This form of award also suited NHS Resolution in that the periodical payments were only for a fixed period of time until the Deceased’s 75 birthday and, in the event that the Sixth Claimant died earlier than the Deceased’s 75th birthday, periodical payments would cease.  The risk to NHS Resolution of the Sixth Claimant exceeding his predicted life expectancy was removed.

We are not suggesting that this form of award is right in every Fatal Accidents Act case and much depends on the requirements of the individual dependents.  This case does illustrate that in a world of financial uncertainty, the only way of guaranteeing that a person’s care costs are met is by way of a periodical payment.  As to whether such financial uncertainty will continue to exist in the future is a matter which an IFA should address and should be considered by the Claimant’s legal representatives.

To our knowledge, this is the first time that NHS Resolution has agreed to pay loss of dependency as a periodical payment in a Fatal Accidents Act claim.

Mamta Gupta was first instructed on this matter in September 2016; Jonathan Jones QC was instructed in December 2018.  Counsel were instructed by Krishna Kotecha at Moosa-Duke Solicitors. 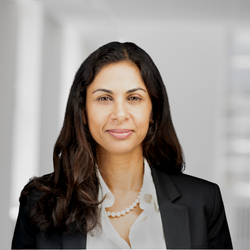