Kawsar Zaman successfully defends another Osteopath on all allegations

Kawsar Zaman has successfully defended an Osteopath, on all allegations, before the General Osteopathic Council’s (GOsC) Professional Conduct Committee.

The outcome followed a multi-day hearing concerning allegations of a sexual nature against the Registrant that were alleged to have occurred during an appointment, contrary to section 20(1)(a) of the Osteopaths Act 1993. Through a forensic cross-examination of the complainant and her husband, Kawsar was able to establish that the complainant’s understanding of the treatments provided were mistaken.

In a 17-page Decision, the Committee ultimately found the substantive sexual allegations against the Registrant to be unproven, and further, that it was not proven by the Council that his conduct was: (i) inappropriate; (ii) not clinically justified; (iii) a transgression of professional boundaries; and (iv) that it amounted to sexual touching.

“You will have seen that I have attended as much of the hearing before the GOsC as was allowed and I wanted to take this opportunity to thank you for what you have achieved for my brother.

While his family knew that it was inconceivable that he would ever have acted in the way alleged, the charges brought against him still had to be vigorously contested and you did this with considerable skill, determination and thoroughness. For all of that, thank you.

Now we just have to ensure that he recovers from what, of course, has been a horrendous year.”

The Council was represented by Mr Christopher Gillespie, Barrister at 2 Hare Court and the Committee was aided by Independent Legal Assessor, Ms Margaret Obi.

Kawsar was instructed by Stuart Sutton of Sutton Defence Lawyers.

Kawsar is regularly instructed to defend clients, at all stages, of professional discipline cases, and has represented doctors and osteopaths, amongst others. 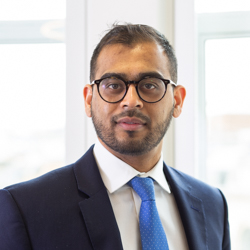