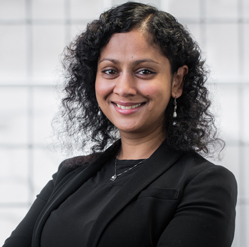 Varsha worked in bioethics and the biological sciences before coming to the Bar.
She graduated from Cambridge University with a BA/MSci in Biochemistry and an MPhil in Molecular Biology. Whilst completing her MPhil, she was awarded a place at E4S, a prestigious international bioethics summer school convened by the Harvard Kennedy School of Government, the European Molecular Biology Laboratory and the European School of Molecular Medicine.
Varsha subsequently worked for several years in bioethics research at the independent think tank, the Nuffield Council on Bioethics. Here, she researched and prepared major reports on the ethical issues concerning dementia and neurotechnologies for the treatment of brain disorders. She also researched the ethics of paediatric clinical trials and global health issues. Varsha completed a Law and Medical Ethics course with Edinburgh University.
Varsha also previously volunteered with the Citizens Advice Bureau at Great Ormond Street Hospital, where amongst other things she examined the importance of free legal advice to the physical and mental wellbeing of patients’ families.
Before joining No5 Barristers’ Chambers, Varsha completed pupillage at a leading police/public law set.
COURT OF PROTECTION - Varsha accepts instructions from local authorities, the Office of the Public Guardian, the Official Solicitor, RPRs, and family members. She acts in both health and welfare and property and affairs cases. Recent instructions include:
Representing the RPR and family of P in a s.21A application where the standard authorisation was being challenged, Representing the local authority in a s.15 application regarding the health care, social care and educational needs of P, Representing the Office of the Public Guardian in a s.22 application concerning the validity of LPAs executed by P and their potential revocation, Given her background in bioethics, Varsha is particularly interested in those cases concerning determination of capacity and best interests.
PRISON LAW - Varsha represents prisoners in Parole Board oral hearings. She also accepts instructions for judicial review and/or claims brought under the Human Rights Act for breach of the prisoner’s Art 5.4 right to speedy review of their detention.
Recent cases include: Junior counsel for the claimant (led by Philip Rule) in the judicial review, R (on the application of Hussain) v The Parole Board, [2016] EWHC 288 (Admin), where the claimant argued breach of the ‘James’ systems duty and breach of the Art 5 ancillary duty, Representing an IPP prisoner at an oral hearing where he was seeking re-release, Representing a claimant in a claim for damages for loss of liberty as occasioned by breach of his Art 5.4 right to speedy review of his detention.
POLICE LAW - During pupillage, Varsha gained experience of judicial review claims, claims brought against the police under the Human Rights Act (in particular Art 2 and Art 3), and civil actions against the police (including claims for assault, false imprisonment, malicious prosecution and misfeasance in public office).
Varsha has acted for the police in a range of civil matters in the Crown, County, Family and Magistrates’ Court. This includes: applications for forfeiture under the Proceeds of Crime Act, SOPOs/SHPOs, DVPOs, police disclosure in family proceedings, and licensing reviews of premises licences.
IMMIGRATION LAW - Varsha accepts instructions in all areas of immigration and asylum law. She is committed to representing claimants in the first-tier and upper tribunal and also acts for BID in bail applications.
Recent cases include:
Junior counsel for the claimant (led by S Chelvan) in the Court of Appeal in a matter concerning Art 8 and whether it is reasonable to expect a child who has lived in the UK for at least seven years to leave, Representing the applicant in a bail application where the applicant had a history of paranoid schizophrenia and was therefore an adult at risk.
INQUESTS, PUBLIC INQUIRIES AND CORONIAL LAW
During pupillage, Varsha assisted on a number of inquests. These involved interested persons including HM Prison Service, the police, healthcare providers, and social services.
Varsha is particularly interested in those inquests where Art 2 is engaged on account of the State’s involvement in the death (e.g. deaths in custody). She has particular experience of inquests where whether or not Art 2 in engaged is in dispute.
Awards
BPTC Major Scholarship, Inner Temple
Duke of Edinburgh Award, Inner Temple
GDL Exhibition, Inner Temple
BBSRC MPhil Research Studentship
Award by Harvard Kennedy School of Government, the European Molecular Biology Laboratory and the European School of Molecular Medicine to attend E4S international summer school
Memberships
Pro Bono Unit
ALBA
Qualifications
BPTC, City Law School: Very Competent
GDL, City Law School: Commendation
Law and Medical Ethics CPD course, Edinburgh University
MPhil Molecular Biology, Cambridge University
BA/MSci (Hons) Biochemistry, Cambridge University: Upper Second Class