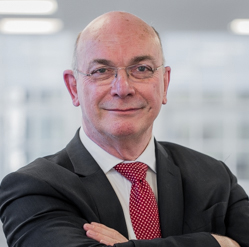 Simon Worlock (2001) (1975) has been an active member of chambers since November 2001 and works extensively as a general criminal practitioner, including regulatory crime. He undertakes all aspects of criminal law in Magistrates and Crown Courts and in the Court of Appeal. He is a meticulous preparer and presenter of cases with close attention to client care.
Prior to joining chambers he was a principle advocate and partner in a busy solicitor criminal practice ( R Gwynne and Sons now MFG Solicitors) with an extensive practice throughout Shropshire dealing with crime at all levels and in particular Courts Martial as a result of which he was awarded his Higher Courts (Criminal Advocacy) Qualification in 1996. He has frequently represented police officers in criminal proceedings. He has appeared daily in Magistrates Courts in the West Midlands (mostly in Shropshire) for over 25 years frequently dealing with:
- Crime
- Fraud
- Licensing
- Youth Court
- Road Traffic
- Agricultural law
- Animal Cruelty
- Health and Safety
- Food safety
- Trading Standards
- Pollution of Rivers and canals
Since joining Chambers he has continued to expand his criminal practice in the Crown Court and Court of Appeal. He is a Grade 2 Prosecutor. He has been led on numerous occasions. He has a wide experience in dealing with large scale public and football disorders, complex drug related offences, dishonesty, serious violence and fraud, Death by Dangerous Driving and POCA cases.
As a child care lawyer he is particularly interested in acting in cases spanning both jurisdictions including:
- Sexual offences such as rape and sexual abuse of children within the family
- Child cruelty
- Baby shaking
- Domestic violence
Simon has a particular interest in representing those with communication difficulties and the appropriate use of intermediaries particularly those with mental health issue and children.
Notable Cases
Leatherland and Pritchard v Powys County Council [2007] EWHC 148 (Admin)
March 2009
successful case stated against decision of Justices after prosecution wrongly destroyed evidence, abuse of process, exclusion of unfair evidence, S 78 PACE Trading Standards, Officers are now obliged to comply with CPIA Code of Practice.
R v Steven Daniels.
March 2009
D was wrongly convicted after trial of child rapes. After advising for further extensive forensic and other enquiries new evidence was found. Despite initial early refusal by a single judge oral application was successfully made for leave to appeal conviction on the basis of misdirection and new evidence which was granted and D released on bail. Two trials then followed. On the first the jury could not agree. On the second the Defendant was unanimously acquitted 2 years after his initial conviction.
R v Brown
2009
Junior counsel double attempted murder of neighbouring couple in their 70s in their own home
R v James Morgan
2009
D was an 18 year old charged with Dangerous Driving. Because of mental health difficulties and behavioural problems (ADHD) he had difficulty in communication and concentration. It was argued that the intermediary legislation while not in force should be adhered to and the trial judge accepted this argument. The Defendant was acquitted
R v Kain Lyall
2010
Dyslexic and dyspraxic youth with exceptionally low IQ accused of a series of very savage assaults which he seemed to admit. He was not able to provide coherent instructions. After numerous applications for special measures and for a psychologist to advise and after specific application a registered intermediary was appointed and psychologist who were critical in determining both his level of understanding and how the trial process should be conducted. After obtaining a CCTV recording previously disregarded this Defendant was acquitted save in respect of a minor matter which he admitted.
R v Caine
2010
3 week trial involving numerous young defendants jointly charged with S 18 woundings and serious public disorder in small Welsh border town. Defendant one of only two acquitted.
R v Ashley
2010
Attempted murder trial when Defendant had shot man with sawn off shotgun and argued lack of intent. Defendant convicted after trial. Cut throat defence by Co accused. Expert evidence as to ballistics.
Memberships
Middle Temple