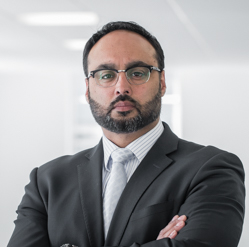 Shakil is highly regarded for his expertise in commercial and chancery litigation. His practice covers a broad range of domestic and international commercial work with a particular emphasis on company, insolvency and partnership litigation:
Commercial: Dealing with a wide variety of contractual and commercial disputes relating to the supply of goods and services, secured finance agreements, agency, banking, mortgage agreements, enforcement of guarantees, retention of title agreements, insurance agreements, bailment and professional negligence.
Company: Representing companies, directors, shareholders and creditors in all aspects of company litigation including applications under the Companies Act 2006, claims in respect of breach of directors’ duties, derivate claims and all types of shareholders’ disputes (including, in particular, unfair prejudice petitions). Acting in Directors’ Disqualification proceedings on behalf of directors and the Secretary of State.
Insolvency: Dealing with aspects of corporate and personal insolvency including receiverships, administrations, liquidations, bankruptcies, company and individual voluntary arrangements, the adjustment of antecedent transactions, tracing and recovery of corporate assets and wrongful trading and misfeasance claims.
Partnership: Representing partners and former partners in all aspects of partnership disputes, including preliminary disputes as to the existence and constitution of partnerships, retirements and evictions, the construction and enforcement of partnership agreements and claims for post dissolution accounts and enquiries.
Interlocutory and Interim Applications: Acting in a wide range of interlocutory and interim applications including freezing and other injunctions, disclosure related applications, security for costs, summary judgment, strike out applications, charging orders and costs related applications.
Public and Administrative Law: As Treasury Counsel acting for various Secretaries of State and government departments in judicial review and other public law proceedings.
Shakil is a skilled advocate and regularly appears in the County Court and in all divisions of the High Court and has significant experience representing clients in mediations. He is known for his approachable manner and his appreciation of the commercial realities of disputes and of clients’ practical requirements.
He is a regular contributor to Corporate Rescue and Insolvency and is a frequent speaker at insolvency and commercial law seminars.
Shakil has regularly been listed by Chambers and Partners as a leading junior (Band 1)
Recent/Notable cases
- Representing Indesit Ltd in injunction proceedings to restrain the Administrator of a customer company from selling or disposing of Indesit stock contrary to its retention of title clause.
- Advising HSBC Bank Middle East Limited in relation to proposed bankruptcy proceedings against an English footballer in respect of AED 28.3m (4.9m) liability under a loan agreement governed by the Federal Laws of the United Arab Emirates.
- Acting in an application to determine whether a HK$15m judgment of the Court of Appeal of Hong Kong could be enforced by way of bankruptcy proceedings in England.
- Representing a liquidator in claims arising from transactions defrauding creditors and preferences and for breach of directors’ duties and misfeasance.
- Representing the Liquidator of a number of connected companies in consolidated tracing and recovery of corporate assets claims against various companies and businesses
- Representing liquidators in their application for a declaration that the prior appointment of administrators by a qualifying floating charge holder was invalid.
- Representing the Supervisor of an IVA on an application by a creditor to set aside the IVA for material non-disclosure and procedural irregularity.
- Representing an Office Holder in a highly contentious application by the Association of Chartered Certified Accountants for a block transfer order.
- Junior Counsel for the estate of a deceased partner in a claim against the former partners for an account to the estate for the deceased’s share
- Acting for a former partner in a solicitors’ firm in a claim for a contribution/indemnity against his former fellow partners.
- Representing a number of former partners in the accounts and enquiries phase of a substantial partnership dispute in which the partnership assets included a significant number of buy to let properties.
Languages
French, Urdu and Punjabi
Recommendations
Ranked in 2020 Chambers
Chambers UK 2020
“He offers detailed and focused explanations.”
Legal 500 2020
Experienced in company, partnership and insolvency litigation with a specialism in unfair prejudice disputes. Much of his work arises from the enforcement of securities such as guarantees, the exchange of goods and services, and contractual disputes. Strengths: “Very professional”
Chambers UK 2019 (Company)
Advises on and litigates a comprehensive range of partnership cases. These cover everything from questions concerning the initial establishment of partnerships through to issues arising from their dissolution. He is particularly at home handling matters involving business partnerships in the commercial property and hospitality sectors. He also acts extensively for professional service and medical partnerships and is especially respected for his determined and persuasive advocacy. Strengths: “He’s very easy to deal with and accessible.”
Chambers UK 2019 (Partnership)
“A highly knowledgeable barrister.”
Legal 500 2019
Experienced in company, partnership and insolvency litigation with a specialism in unfair prejudice disputes. Much of his work arises from the enforcement of securities such as guarantees, the exchange of goods and services, and contractual disputes. Strengths: “He’s very big on director disqualification, and very active in that area.”
Chambers UK 2018
Experienced in company, partnership and insolvency litigation with a specialism in unfair prejudice disputes. Strengths: “He’s very clear, pragmatic, commercially astute and very driven to achieving a good result.”
Chambers UK 2017