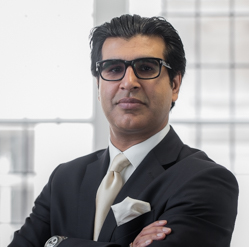 Rizwan Ashiq has earned a reputation as one of the country’s leading and most sought after barristers. He has extensive trial experience in complex civil and corporate litigation, chancery and civil fraud litigation in the High Court. Dispute resolution is adversarial in nature and traces its root to medieval trial by conflict. Notwithstanding the new and somewhat debatable emphasis on civility, the system pits advocates against one another in a contest to advocate the merits of their case and to win a result for their client. In order to win cases, when he steps into the courtroom, Rizwan relies on his superior knowledge, advocacy, skill, training, preparation and experience to win on behalf of his client. Although this quote is far removed in time (1821) “An advocate, in discharge of his duty, knows but one person in all the world, and that person is his client‘, the advocate’s loyalty to client remains.
Rizwan believes that there are no impossible or hopeless cases and winning is not everything, it’s the only thing. He has a fearsome and unparalleled record of wins in seemingly hopeless cases. He believes winning trials takes more than just knowing and reciting the law, great tactics, great advocacy, great preparation, and absolute fearlessness in court is required. A winning strategy, and a winner’s mindset is of utmost important. As Sun Tzu said “Every battle is won before it is ever fought. Victorious warriors win first and then go to war, while defeated warriors go to war first and then seek to win”
Rizwan particularly specialises in cases where there is crossover between criminal, civil and regulatory liabilities and remedies/sanctions which have become such crucial element of business in the modern era. He possesses the unique agility, ability and dexterity to advise and act in Commercial Court, Chancery Division proceedings and Crown Court jury trials as and when these cases require it. There is a significant gap in the offering of the commercial bar and the criminal bar at the point at which commercial litigation, criminal proceedings, regulation and enforcement collide. Rizwan uniquely plugs that gap.
Rizwan acts and advises in complex financial, corporate and commercial disputes and criminal/regulatory investigations. He has acted in complex national and international fraud and commercial disputes and investigations over the last few years and he acts for companies, shareholders, senior executives, directors and other individuals. He routinely advises high net worth individuals and companies resident and based overseas.
He has acted for clients based or with interests in the US, India, Africa, Middle East and Europe on a range of civil, criminal and commercial matters including the Bribery Act, directors’ duties, Proceeds of Crime Act and tax evasion.
He specialises in individual and corporate criminal liability with particular expertise in financial crimes under the Fraud Act, Proceeds of Crime Act, conspiracies to defraud, breach of trust, bribery, money laundering, sanctions abuse, insider trading and other forms of market abuse and deception.
His commercial practice is centred on contractual disputes, shareholder disputes, unfair and prejudicial conduct petitions, civil fraud, breach of trust, professional negligence or misconduct, breaches of directors’ duties and director’s disqualification proceedings. He has considerable experience in obtaining and defending interim injunctions especially freezing injunctions and search orders.
He has extensive experience in acting for companies, Cash and Carry and individuals in matters relating to HMRC seizures of Alcohol and cigarettes, WOGAR, Duties, VAT and other tax matters in the tax tribunal.
His practice spans the criminal, regulatory and subsequent civil actions that ensue from national and global investigations for example into money laundering, fraud, tax evasion, Libor and Forex.
Rizwan Ashiq has worked with/or has been led by some of the finest Queens Counsel in the country in particular Orlando Pownall QC, Mark Anderson QC, Jim Sturman QC, Alun Jones QC, Andrew Mitchell QC, David Berkley QC, Ben Emmerson QC, Jonathan Caplan QC, Ian Macdonald QC, Geoffrey Cox QC, Geraint Jones QC, Jerome Lynch QC, Tony Shaw QC, Charles Miskin QC ,James Pickup QC and Andrew Caldecott QC.
Notable Cases
Karbhari v Ahmed ([2013] EWHC 4042 (QB))
Eastenders, Hare Windsor and Ors v Crown Prosecution Service [2011] EWCA Crim 143
Cheema and Ors v Nottingham and Newark Magistrates’ Court and Anor [2013] EWHC 4022 (Admin)
Eastenders, Hare, Windsor v Bristol Crown Court and Anor [2011] EWHC 1899 (Admin)
Hare and Ors, R (On the Application Of) v The Crown Prosecution Service [2011] EWHC 842 (Admin)
Gojra and Anor, R v [2010] EWCA Crim 1939
Hare and Ors v HM Revenue and Customs [2014] EWCA Civ 1613
Cheema and Ors v Nottingham and Newark Magistrates Court and Anor [2013] EWHC 3790 (Admin)
Revenue and Customs v SED Essex Ltd [2013] EWHC 1583 (Ch)
Glenn and Co (Essex) Ltd and Ors v HM Commissioners for Revenue and Customs and Anor [2011] EWHC 2998 (Admin)
Lithuanian Beer Ltd v Revenue and Customs [2015] UKFTT 441 (TC)
Aabsolute Bond Ltd v Revenue and Customs [2012] UKFTT 603 (TC)
R v Parradine (Aaron) [2011] EWCA Crim 656
R v Avery (Richard Sean) [2007] EWCA Crim 1830
Other
Analysis Eastenders Cash and Carry: Lessons Learnt
10 June 2011
Rizwan Ashiq was the counsel (for the suspects) in the Eastender cash and carry litigation and Jonathan Fisher QC best describes the stance and approach taken “In this case an aggressive stance adopted at the outset has paid dividends for the suspected offenders”. A sample of the precedent setting cases below demonstrate the breadth and the range of his practice and expertise.