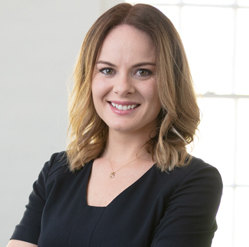 Rachel has developed a strong Court of Protection practice, both in relation to health and welfare and property and affairs. She regularly acts for RPRs, the Official Solicitor, family members, local authorities and the Office of the Public Guardian in relation to applications to the Court of Protection.
Rachel’s experience includes issues regarding capacity disputes, s.21A applications, the transfer of proceedings from the Family Court to the Court of Protection and personal welfare applications involving decisions about residence, care/treatment, marriage and sexual relations.
Rachel is also instructed regarding contested applications for the appointment of deputies (welfare/financial affairs) and applications by the Office of the Public Guardian to revoke lasting power of attorneys. Rachel recently represented the Public Guardian in a contested final hearing where the retrospective capacity of a person to execute a lasting power of attorney was determined.
Rachel has recently delivered training seminars on the following topics:
Children, Young People and the Court of Protection,
The Overlap between the Mental Health Act and the Mental Capacity Act,
The Court of Protection and the Observance of Religious Practices.
Rachel’s previous work as a Hospital Manager considering appeals against detention under the Mental Health Act gives her a solid understanding of the law and of the inter-relationship between the Mental Health Act and the Mental Capacity Act.
Rachel has also been instructed to appear in the First Tier Mental Health Tribunal
Notable Cases
A Local Authority v XC and Others
2017
Rachel represented the local authority in this case concerning a learning disabled young man whom it was alleged was being forced into a marriage in Pakistan. The case required considerable sensitivity and an understanding of different cultural practices. Ultimately a Forced Marriage Protection Order was made by the court and final declarations that XC lacked the capacity to marry or to consent to sexual relations.
JK (by his litigation friend the Official Solicitor) v A Local Authority
2017
Rachel represented the local authority in this case involving a young man who suffered an acquired brain injury following a road traffic accident. Issues included the adequacy of the capacity evidence and the court’s power in ordering reports under s.49 of the Mental Capacity Act 2005.
YQ (by her litigation friend, KJ) v A Local Authority
2017
Rachel represented YQ via her RPR and litigation friend in a s.21A challenge to a deprivation of liberty authorisation. YQ suffered from a longstanding schizoaffective disorder and had spent periods of time detained under s.3 Mental Health Act 1983. The case involved consideration of both the Mental Health Act and Mental Capacity Act in relation to a potential claim for damages under the Human Rights Act for unlawful deprivation of liberty. The case culminated in YQ moving to a less restrictive placement in accordance with her wishes.
A Local Authority v LW (by her litigation friend, the Official Solicitor)
2017
Rachel represented LW via the Official Solicitor. Issues included the authorisation of LW’s deprivation of liberty on her leaving care at the age of 18. LW’s capacity and best interests were considered in relation to residence, contact and care. Particular consideration was given to the use of seclusion and restraint as part of LW’s care plan.
Office of the Public Guardian v CM and HM
2017
Rachel represented the Public Guardian in an application for the revocation of lasting power of attorneys made in respect of both health and welfare and property and affairs. The application was made to the court by the OPG after concerns were raised regarding alleged financial abuse of P by his attorneys. After considering the evidence the court revoked both LPAs pursuant to s.22(3) Mental Capacity Act 2005.
P v NCC and NHFT
2016
Rachel represented the local authority in this case considering the capacity and best interests of a gentleman with Korsakoff’s syndrome and pre-senile dementia.
Qualifications
Bar Professional Training Course; UWE Bristol (Outstanding)
ADR Group Civil and Commercial Mediator
LLB Law; Aberystwyth University
Lincoln’s Inn Hardwicke Scholarship and Buchanan Prize