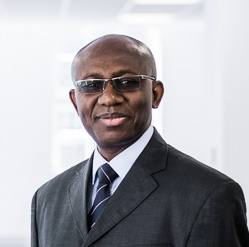 Professor Nelson Enonchong read law at the University of Yaounde and Jesus College, Cambridge, and is now the Barber Professor of Law at the University of Birmingham. He has particular expertise in international arbitration, international sale of goods and supply of services, financing of international trade and private international law.
International Arbitration
He is a Fellow of the Chartered Institute of Arbitrators (FCIArb). His expertise and experience include both ad hoc (including ad hoc arbitrations under the UNCITRAL Arbitration Rules) and institutional arbitration, including arbitration under the rules of the ICC, LCIA, ICDR and ICSID. He also has expertise in national arbitrations involving a variety of national laws including England and Wales, Cameroon, Hong Kong, Nigeria and Singapore. Appointments include:
Co-arbitrator, LCIA arbitration, in a dispute concerning an international money transfer contract between a leading international money transfer company and the postal services of a foreign country;
Sole arbitrator, LCIA No UN132512, in a dispute concerning a contract for corrosion surveys of oil and gas pipelines, under UNCITRAL Arbitration Rules;
Co-arbitrator, LCIA arbitration concerned with the interpretation of a Joint Operating Agreement relating to the operation of an oil mining lease; and
Co-arbitrator, LCIA arbitration concerned with a claim for breach of warranty in a share sale and purchase agreement.
International Trade and Finance
In the area of international trade and finance, he has expertise on a wide range of international trade terms, including traditional terms such as FAS, FOB, CIF, and C and F and also INCOTERMS. He has special expertise on payment and financing of international trade especially involving bills of exchange, letters of credit or demand guarantees. He is the author of a leading texts on letters of credit and demand guarantees (see paragraph on Books below). He has acted in cases involving international sale of goods and private international law issues. Examples include:
Advised in relation to potential proceedings in the English courts for the enforcement of a foreign judgment against a foreign state entity (raising issues of state immunity),
Advised on the private international law issues relating to the effectiveness of a power of attorney executed in England to authorise the use of immovable property in a foreign country as security for a facility from a bank,
Advised on the private international law issues in disputes arising out of the administration of property in England following the grant of letters of administration in a foreign country and re-sealed by an English court.
Languages
French
Memberships
Fellow of the Chartered Institute of Arbitrators
Honourable Society of the Inner Temple
Society of Legal Scholars
The Cameroon Bar Association
Member of the Editorial Board Journal of African Law
Member of Editorial Board, African Journal of International and Comparative Law
Qualifications
LLM, PhD (Cantab)
Barber Professor of Law, University of Birmingham
He has written books for leading publishers such as Oxford University Press and Sweet and Maxwell and has been widely published across legal and scholarly journals. His publications include:
Books
First Supplement to Duress, Undue Influence and Unconscionable Dealing, 2021, Sweet & Maxwell
Duress, Undue Influence and Unconscionable Dealing, 3rd edition, 2019, Sweet and Maxwell,
Duress, Undue Influence and Unconscionable Dealing 2nd Edition– 2012, Sweet and Maxwell,
The Independence Principle of Letters of Credit and Demand Guarantees (2011, Oxford University Press). For details please click here to view the publisher’s website,
Duress, Undue Influence and Unconscionable Dealing – 2005, Sweet and Maxwell,
Articles
Illegal Transactions – 1998, Lloyd’s of London Press.
“Letters of Credit Payable Overseas and Third Party Debt Orders” (2015) Butterworths Journal of International Banking and Financial Law 674,
“The law applicable to demand guarantees and counter-guarantees” [2015] Lloyd’s Maritime and Commercial Law Quarterly 194-215,
“Enforcement in England of Foreign Arbitral Awards Based on Illegal Contracts” [2000] Lloyd’s Maritime and Commercial Law Quarterly,
“Public Policy in the Conflict of Laws: A Chinese Wall Around Little England” (1996) 45 International and Comparative Law Quarterly 633 – 661,
“Service of Process in England on Overseas Companies and Article 5(5) of the Brussels Convention” (1999) 48 International and Comparative Law Quarterly 921 – 936,
“Harmonization of Business Law in Africa: Is Article 42 of the OHADA Treaty a Problem?” (2007) 51 Journal of African Law 95-116.