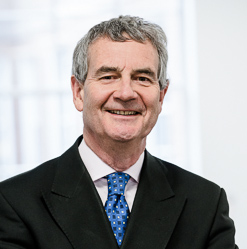 Paul is a leading silk with over 30 years’ experience in both Clinical Negligence and Personal Injury Litigation as junior counsel and in silk.
Described as ‘top drawer silk with a real desire to fight and win the difficult case’ Paul is regularly recognised for his ‘pragmatic advice and excellent client manner’. His cross examination and negotiating skills are described as ‘formidable’, his knowledge ‘encyclopaedic’ and he is a favourite of instructing solicitors due to his ‘genuine commitment to clients’.
Paul has received many instructions involving medical accidents/injury. The following are examples of instructions received in the last 3 years:
- Failure in a GP’s practice to recognise/diagnose symptoms of meningitis.
- Failure at hospital to recognise signs of serious respiratory distress in an infant resulting in a pharyngeal abscess, hypoxia and catastrophic brain damage.
- Failure to place patient suffering from severe psychosis under strict observation leading her to abscond and attempt suicide with catastrophic consequences.
Recommendations
“Extremely hardworking and dedicated.”
Legal 500 2019
Highly experienced in challenging catastrophic injury and fatal accident claims. He also has expertise in industrial disease cases. Strengths: “He gets to the heart of a case with ease and precision” “Paul has an impressive appetite for fighting difficult cases. He has an excellent client manner and negotiating skills combined with experience, knowledge and a pragmatic approach.” Recent work: Defended Myerscough College in a claim brought by a trainee arboriculturist who fell out of a tree he was climbing under supervision when he detached all his safety gear.
Chambers UK 2018
“The go-to silk on circuit for high-value personal injury cases.”
Legal 500 2017
Highly experienced in catastrophic injury and fatal accident claims. He also has expertise in industrial disease cases. “One of the best and most experienced serious injury silks in the Midlands. He doesn’t shy away from difficult cases. A powerful advocate in court.” “His wealth of experience, pragmatic advice and excellent client manner make him a go-to personal injury QC.”
Chambers UK 2017
“He has an ability and desire to fight the difficult cases, providing a clear and tactical approach.”
Legal 500 2016