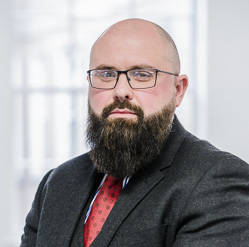 Omar Ensaff joined No5 in June 2004. Before joining chambers he was the Judicial Assistant to the Vice-Chancellor and Lord Justice Buxton at the Civil Division of the Court of Appeal.
Since joining chambers Omar has developed a general commercial practice which includes a significant amount of insolvency work, including, and in particular, directors’ disqualification matters.
Omar, together with Stephen Whittaker of No5, has been commissioned by Lexis Nexis to update both the Corporate and Personal Insolvency Volumes of Encyclopaedia of Forms and Precedents with the new volumes scheduled to be published in late 2017.
Omar has been regularly listed in either the Legal 500 or Chambers UK for Insolvency matters in the Midlands.
Also been listed in Chambers UK and Legal 500 for expertise in construction disputes.
EXPERIENCE,
Examples of the type of dispute that Omar can assist with (and this is not an exhaustive list) are set out below:
Personal Insolvency,
Applications to set aside statutory demands, Bankruptcy petitions, Applications to annul, Applications by trustees in bankruptcy during course of bankruptcy, Transaction avoidance disputes, Transactions at an undervalue (i.e. s.339 disputes), Preference claims (i.e. s.340 disputes), Void disposition claims (i.e. s.284 claims), Transactions defrauding creditors (i.e. s.423 claims), Matters involving IVAs, Disputes regarding trustee’s remuneration.
Corporate Insolvency,
Applications to restrain presentation of winding up petition, Applications to restrain advertisement, Winding up petitions, Applications by liquidator during course of liquidation, Transaction avoidance disputes, Transactions at an undervalue (i.e. s.238 disputes), Preference claims (i.e. s.239 claims), Void disposition claims (i.e. s.127 disputes ), Validation orders, Transactions defrauding creditors (i.e. s.423 claims), Matters involving CVAs, Administration orders, Matters involving companies in administration.
Directors’ Disqualification,
Defending and advising in respect of disqualification proceedings, Section 17 (permission to act) applications.
Omar has also provided lectures to R3 members in both the Midlands and London in respect of claims by insolvency practitioners and creditors against directors.
He also has particular expertise in insolvency procedures involving companies in the building and engineering industries (please see Omar’s Technology and Construction Profile).
Omar accepts direct professional access and direct public access in appropriate cases.
Recommendations
“Very experienced in insolvency work” and “Recommended for directors’ disqualification disputes.”
(Legal 500 2017)
“Clients love him because he is reliable and clearly knows what he is talking about.”
(Legal 500 2016)
“Recognised for his strength in insolvency.” and “He is particularly well regarded in both personal and corporate insolvency.”
(Legal 500 2015)
“Specialises in transaction avoidance work, and acts in a number of insolvency matters for a broad array of clients. Expertise: “He gets to grips with cases very quickly, is very thorough in his preparation, and deals with clients very well.”
(Chambers UK 2014)
Chambers UK in previous years has also stated: “Omar Ensaff of No5 Chambers (Birmingham) is praised for his ‘no-nonsense approach’ by interviewees who note that ‘he is determined in Court, and presents in a highly effective way.’ ‘His pleading and written work are amongst the best I have seen,” said one solicitor.’”
Notable Cases
In the matter of (1) Liberty Holdings Unltd (2) Copperidge Developments Ltd sub nom Keith Owen v Secretary of State for Business, Innovation and Skills (2015) LTL
10/11/2015
Permission to act application by disqualified director to be involved in the management of two companies where he had been disqualified under s.2 of the Act. Gives guidance as to the correct approach where there has been a s.2 disqualification.
Re Care People Limited (In Administration) [2013] BCC 466
Decision in respect of the valid appointment of an administrator by a qualifying floating charge holder.
Gilbert Deya Ministries v Kashmir Broadcasting [2010] EWHC 3015 (Ch)
Application to restrain advertisement of winding up petition. Establishes that a creditor cannot use the unregistered company winding up procedures (under Part V of the Insolvency Act 1986) to wind up a trust.
Wynnstay v R and R Pigs and others
A four day trial in the Chancery Division at the Birmingham District Registry before HHJ Simon Brown QC defending a s.423 IA 1986 application made by a creditor against the debtor company and the debtor company’s directors.
Jackson v HMRC
Judicial review claim of decision by HMRC to vote against an IVA proposal by Mr Jackson.
Cropaid v Bimas
Application to restrain presentation of petition involving cross-border insolvency matters.
Secretary of State for Business, Innovation and Skills v Akhtar 3 day trial defending director disqualification proceedings (led by Michael Booth QC)
Multiple applications to restrain presentation of / advertisement of winding up petition
Multiple applications to set aside statutory demands
Multiple s.17 CDDA86 applications
Multiple defending of director disqualification cases
Memberships
MCCBA
Qualifications
LLB (London School of Economics)
Cardiff High School