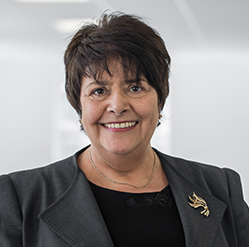 Nicola came to the Bar in 1992, after a successful academic career (at Wolverhampton University) which saw her publish over 50 articles and during which time she was a visiting Professor at University of Akron (1989-90), School of Law, Ohio, USA and also a Fulbright Fellow. Nicola continues to give lectures to other professionals, including groups such as the Society of Trust and Estates Practitioners and local Law Society groups.
Nicola is now a specialist Chancery practitioner. She is recommended in Chancery in Chambers UK and is quoted as “a ferocious cross-examiner” (2022), as “a very strong, knowledgeable and able opponent”, “incredibly good on the private client side” (2021) and having “a remarkable grasp of a complex area of law and yet manages to present her views in a down-to-earth and understandable manner” (2020).
Nicola’s particular areas of expertise, relevant to this Group include:
All aspects of taxation, especially as it affects farmers and landowners, including tax planning, APR, BPR. Also VAT,
Ownership of land, including beneficial interests (by way proprietary estoppel or constructive trusts), agricultural tenancies,
Other aspects of property law, including easements, restrictive covenants and conveyancing,
Partnership and company disputes (including minority protection), All aspects of wills, including drafting, construction and probate litigation.
“She is a really good advocate and confident on her feet. She is a ferocious cross-examiner.”
Chambers UK 2022
“She is a very strong, knowledgeable and able opponent.” “She is incredibly good on the private client side.”
Chambers UK 2021
“Nicola has a remarkable grasp of a complex area of law and yet manages to present her views in a down-to-earth and understandable manner which instructing solicitors and clients appreciate.”
Chambers UK 2020
A traditional chancery practitioner with experience in wills, probate and trusts matters. She has appeared in the High Court and Court of Appeal and also maintains a non-contentious advisory practice. “She is a very clear and composed advocate. She doesn’t waffle, she makes her point well and then moves on.”
Chambers UK 2016
“She brings knowledge and experience to bear on a case in a direct manner that retains the confidence of the lay client while communicating an informed professional and dogged determination to assert her client’s case to a judge and in negotiations”
Chambers UK 2015
“Nicola Preston has particular expertise in Chancery matters.”
Legal 500 2012
“Nicola Preston is a chancery practitioner at the same set who is noted for her work in wills, tax, and VAT matters.”
Chambers UK 2010
“Nicola Preston excels at complex probate and trust matters...and is recommended for such cases.”
Legal 500 2010
Reported Cases
Re Weetman [2015] WTLR 1745
Meek [2014] COPLR 535; [2014] WTLR 1155
Drakeford v Cotton [2012] 3 All ER 1138; [2012] 3 FCR 464; [2012] WTLR 1135; [2012] 15 ITELR 144
Euro Stock Shop Ltd v Revenue and Customs Commissioners [2010] STC 2454
Heath v. Heath [2010] 1 FLR 610
Sprackling v. Sprackling [2009] WTLR 897
Bates v. Wheildon [2008] WTLR 1705
Hartshorne v. Gardner [2008] WTLR 837
Dunwood Travel Limited v. Revenue and Customs Commissioners [2008] STC 959 (CA); [2008] STC 411
Ledger v. Wootton [2008] WTLR 235
Staffordshire County Council v. Challinor [2008] 1 P and CR 10
Kynnersley v. Wolverhampton City Council [2008] WTLR 65
Land v. Estate of Land [2007] 1 WLR 1009
Hughes v. Hughes [2005] 1 FCR 679
McNulty v. McNulty [2002] WTLR 737
Memberships
Nicola is a member of the Chancery Bar Association and the Midland Chancery and Commercial Bar Association. She is Treasurer of the latter.
Qualifications
LLB (Manchester)
LLM (Birmingham)