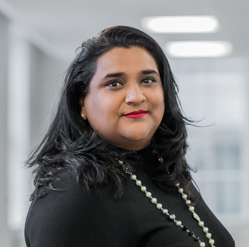 Nandini has specialised in family work for the past 20 years. Her key areas of interest include:
Cases involving children, whether these are as a result of the breakdown of family (private law arena of section 8 of the Children Act 1989) or where the state has chosen to intervene in the family in care proceedings, Cases involving vulnerable teenagers and adults which arise as a result of forced marriage or the need to take best interest decisions where there is a lack of capacity in the Court of Protection, Cases involving international and jurisdiction elements, both in the international movement and abduction of children (Hague Convention and non convention countries) and also where issues arise with the recognition of foreign marriages.
She has regularly appeared in complex and sensitive fact-finding hearings in the High Court and has no qualms at appearing at the Royal Courts of Justice and operating out of No5 Chambers’ base at Greenwood Hose, Salisbury Court in London as well as in the Courts local to the Midlands and Bristol.
Nandini has repeatedly appeared as the advocate for the child within such proceedings working in conjunction with Cafcass Guardians in public law proceedings and with organisations such as NYAS as rule 16.4 guardians in private law proceedings.
Her work on behalf of local authorities has included lengthy contested High Court care cases where issues of sexual abuse have featured and where it has been an essential part of her role to advise on appropriate disclosure of evidence, PII and the consequences of concurrent criminal proceedings. This aspect of her work has also included cases that have involved Interpol and the need to gain evidence from abroad.
Nandini has been part of the team from the No5 Family Group who have assisted in training solicitors and social workers in the new PLO procedures, preparation and giving of evidence.
She has direct experience of cases involving countries such as Latvia, Romania, Ireland, Bangladesh, Pakistan and the USA.
Nandini has appeared in such cases against silks, as junior to leading counsel and, predominately, in her own right.
Nandini takes pride in ensuring that her clients, whether children, vulnerable adults or professionals, will find her dealings with them as approachable, sensitive and straight forward.
Her fluency in Hindi and Bengali give her additional skills in dealing with advices on dowry related disputes as well as enabling her to relate to some clients on a much more direct basis freeing them to give more comprehensive instructions as a result. Clearly possession of these skills and past experiences mean that Nandini is well suited to tackle many cross-cultural family disputes.
Languages, Fluent in Hindi and Bengali.
Recommendations
“Nandini dealt with my case in a thorough and articulate manner. She demonstrated her skills and knowledge in such a professional manner, that any flaws highlighted were turned into a positive! Nandini was honest throughout our dealings and did not raise any expectations which I am fully grateful for. This lady is of a high calibre and a true asset to No5 Chambers! I would strongly recommend Nandini to anyone who requires professional help in Family Law.”
Public Access Client, October 2014
Notable Cases
Re XCC v AA, BB, CC, DD [2012] EWHC 2183 (COP), [2013] 2 FCR 401
A case heard by Mrs Justice Parker determining whether or not a vulnerable young adult possessed the capacity to consent to marriage.
Memberships
FLBA
ALC (pending confirmation)
Qualifications
LLB Hons – University Sheffield
Harmsworth Scholar – Middle Temple