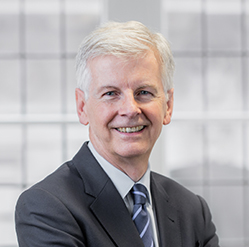 Mike O’Brien appears regularly in the Court of Protection instructed by local authorities, the Official Solicitor and family members in cases involving health, welfare, finance and deprivation of liberty. He became a QC in 2005.
He successfully represented the local authority, seeking to take into care WMA, a 25 year old man with autistic spectrum disorder, who wanted to live with his mother in living conditions which gave rise to concerns. In a complex case, which raised difficult issues around the precise level of incapacity and also WMA’s Article 8 Rights, he argued the importance of distinguishing the right to a private life from the right to family life. NCC v WMA and MA [2013] EWHC 2580.
He represented a local authority where a 22 year old woman who lacked capacity, was in a secure care home, had a serious physical conditions and had had two children taken into care, was nonetheless entitled to have unprotected sexual relations with a boyfriend which could lead to pregnancy and another child being taken into care.
And in another matter he argued that for the Official Solicitor that an elderly woman held in secure accommodation with dementia should be allowed out to go to the park and walk her family dogs. In another case involving a complex Power of Attorney dispute over the property of a person taken into care he successfully negotiated a settlement between warring members of a family.
Mike initially trained as a solicitor in Birmingham, but later transferred to the bar. During his career he taught law for six years, practiced in a firm specialising in high profile criminal cases in London and practiced as a solicitor advocate in London, which saw him in court daily. Elected as an MP, he was a Minister in the Home Office where he helped take through the Human Rights Acts and FOI legislation and then the Foreign Office and was Minister of State for Health. He is a member of HM Privy Council. He was a Law Officer advising the government on legal issues, having served as Solicitor General For England and Wales for two years. He was involved in decisions leading to the creation of the Mental Capacity Act. In 2011 he joined No5 Chambers where he specialises in Court of Protection cases and Judicial Review, although he has appeared in the Court of Appeal on property and chancery disputes.
Memberships
Mike is a member of COPP