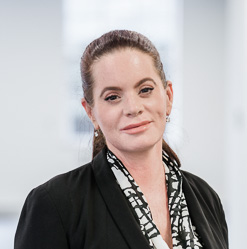 Lynette initially studied in South Africa before undertaking degrees in Law and a Masters in Law at Birmingham University.
With a varied and extensive criminal practice, predominantly defence, Lynette also prosecutes, a Grade 3 Prosecutor, she is on the Attorney General’s prosecuting list and a member of the CPS Rape panel. She has experience in dealing with cases as both a prosecutor and defender across the full range of criminal offending.
Instructed in serious crime cases including murder and attempt murder, offences of violence - including gang related violence, large-scale drug conspiracies, firearm offences and child cruelty. Sexual offences including allegations of rape, historic abuse, grooming offences and familial offences.
Versatile and intuitive, with an excellent working familiarity with many aspects of psychiatric and psychological evidence, she is renowned for her client care skills and ability to relate to people from all walks of life. Lynette is regularly counsel of choice in cases where the Defendant is known to be challenging or vulnerable due to her experience and ability to develop a rapport and communicate with the client.
Lynette is one of the few barristers with experience in applications for Habeas Corpus.
Accredited under the Public Access Procedure.
Notable Cases
R –v- F
Represented defendant charged with riot during the Barton Arms incident where firearms were used.
R –v- Phillips
Represented defendant charged with the theft of over 700k from cash machines
R –v- I
Defendant charged with assault who was arrested after fleeing the country. Issues involving religious beliefs
R –v- Deeney
Defending in a serious multi handed assault case involving a professional footballer
R –v- P
Prosecuted historical rape case where a father had abused his daughter over a 10 year period
R –v- K
Defendant charged with sexual assault. Issues involving the clients IQ and learning difficulties
R –v- Adams
Defendant charged with domestic violence. Issues involving the defendants military service and deployment to Afghanistan
R –v- H
Defendant charged with harassment. Case involved the use of abusive messages by text/social media and threats of sexual assault.
R –v- Cleland
Defendant charged with wounding a relative by slashing his throat following provocation
R –v- Store
Represented Bank Manager charged with the theft of 46k from Clients. Complex issues involving power of attorney for one of the customers.
R –v- C
Defended teenager charged with the rape of a stroke victim.