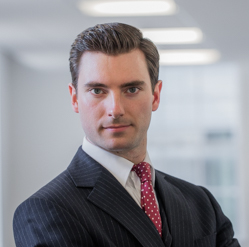 Lukas Hamilton Eddy continues to develop and grow a diverse and busy regulatory practice.
This has included acting as junior counsel during the course of a three-week health and safety trial concerning the prosecution of a haulage company, following the death of an employee.
Professional Misconduct is a particular interest. He regularly receives instructions from the Police Federation, representing officers in Gross Misconduct Hearings as well as in the Criminal Courts. Cases have included public order offences, contraventions of the Data Protection Act and sexual harassment.
He has also represented the interests of nursing staff at the Coroner’s Court, most notably in a case where a nurse was implicated in contributing to the death of a patient in her care.
His regulatory practice extends to planning matters attracting criminal liability and has defended individuals charged with breaching Tree Preservation Orders and conducting unauthorised works to scheduled monuments.
He advises and prosecutes on behalf of local governments throughout the Midlands, in matters as diverse as Environmental Protection Act offences, breaches of Anti-Social Behaviour Injunctions, Housing Act contraventions, Community Protection Notices as well as confiscation under the Proceeds of Crime Act. He was able to secure one of the largest enforcements penalties of 2019 in relation to the unlawful operation of a caravan storage business.
Beyond his court work, he has provided training to local government lawyers at in-house teaching seminars.
As a keen shooting sports enthusiast, he is familiar with all aspects of firearms law and currently sits on the Executive Committee of the UK delegation of the Confederation de Chasse (CIC). He welcomes enquiries from firearms or shotgun certificate holders.
Awards
Joseph Priestly Award, Inner Temple.
National Accident Helpline Future Legal Mind Essay Prize, winner, 2015.
Kalisher Trust Essay Prize, second place, 2017.
Memberships
Association of Regulatory and Disciplinary Lawyers.
Confederation de Chasse International.
Qualifications
MA (hons), University of St Andrews.
LLB (hons), City University London.
BPTC, City University London.