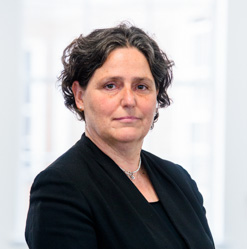 Lorna regularly appears in complex and sensitive cases involving children both in the Public Law and Private Law spheres at County Court and High Court level together with appeals. In addition she has a keen interest in international movement of children and child abduction cases.
Lorna represents parents, alleged perpetrators of injuries, children instructing their own solicitors, CAFCASS Guardians as well as Local Authorities and she has also acted as Advocate to the Court.
The areas of work covered include all aspects of physical, emotional and sexual abuse (including those which are the subject of medical dispute/controversy such as brain injury, sudden death in infancy, FII and cases involving the death of parents).
Similar skills are also engaged for work pursuant to the High Court’s Inherent Jurisdiction involving adult children under a disability and issues concerning the withdrawal of medical treatment from children.
Lorna is co-author of the book “Challenging and Defending Local Authority Child Care Decisions”, which was published in March 2013.
Recommendations
"A first-rate children law silk who is much in demand."
Chambers UK 2021
"Fearless, talented and hardworking in equal measures."
Legal 500 2021
“She’s a highly experienced children law silk and is regularly instructed in the biggest children law cases in the Midlands.”
Chambers UK 2020
“Fearless, talented and hardworking in equal measures.”
Legal 500 2020
“She has a long-established reputation for handling the biggest and most complex of care cases. Undoubtedly one of the market leaders in children work.”
Chambers UK 2019
“Exceptional silk dealing with a range of children law matters, from international adoption to complex physical and sexual abuse cases. She is noted for her expert representation of children, parents and local authorities.” Strengths: “A leader in the field. One of the standout practitioners and a leader at the Bar.”
Chambers UK 2018
“She has a forensic eye for detail and is always one step ahead.”
Legal 500 2019
“A highly regarded silk with a meticulous approach.”
Legal 500 2017