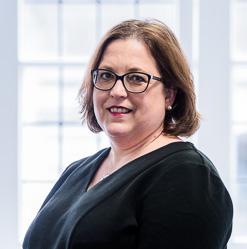 Keri has advised on education law for most of her career, initially in-house at a local authority. That work encompassed advising schools directly on matters which fall to be dealt with at that level, to advising on large county-wide projects such as school reorganisation, major safeguarding investigations, secondment of statutory officers and arrangements for the discharge of another local authority’s functions.
Keri has primarily acted for local authorities since her return to practice, but is keen to expand her range of clients.
Advice to schools has ranged from admissions, exclusions and discrimination to governance and reorganisation matters.
Challenges in respect of special educational needs provision are a particular area of interest, including those cases falling within the National Trial.
She has also given advice to independent schools and to the parents of pupils there in relation to matters affecting the relationship between those schools and their pupils.
There is a significant overlap in Keri’s work in the education sphere with her public law and court of protection practices.
Languages
Fluent French
Awards
Erasmus Scholar
Memberships
ALBA
CoPBAR
CoPPA
Qualifications
LLB Hons - University of Southampton

A Local Authority v JB and SB
No5’s Keri Tayler has obtained an order for costs in the Court of Protection in a case where the local authority’s application for an injunction to prevent P’s eviction from his placement was described as “doomed" and “misconceived”...