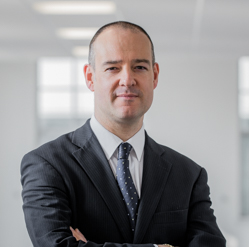 “An exemplary advocate.”
“Without doubt one of the best performing.”
“Each case is meticulously prepared.”
“A persuasive and impressive manner.”
“First rate.”
“Amongst the best.”
“Knows how to exploit weaknesses in his opponents’ cases.”
John’s experience of fraud and commercial crime has been built up by cases of substance. He has participated in trials of many months both on behalf of the Crown and the Defence.
John is one of the very few Criminal Law barristers to have been feted by the Times in their ‘Lawyer of the Week’ section.
Please see below for notable cases.
Level 4 advocate on the specialist CPS Fraud Panel
Level 4 advocate on the specialist CPS Proceeds of Crime Panel
Prior to taking Silk John was a Grade 4/Level 4 CPS Prosecutor for over a decade
Sits as a Recorder
Recommendations
“He is always on top of his papers, and is very clear, thoughtful and persuasive.”
Chambers UK 2020
“He is a class act.” “He has a very strong work ethic.”
Chambers UK 2019

Notable Cases
Prosecution unless otherwise stated
Ross Richards
Prosecuting. A multi-million pound benefit figure being contended for, in the context of complex issues of business ownership and property portfolio.
Neil Allison
Defending a surveyor charged as part of a voluminous conspiracy to commit mortgage fraud. Acquitted after a 2-month trial.
Jillian McNally
Defending an alleged drug dealer who also faced money-laundering allegations with an indictment span of 6 years. Not guilty verdicts secured. Police Operations Torchio and Redchange.
Abdul Khamis
Operation Keysbrook. Prosecuting a professional handling operation where cars worth hundreds of thousands of pounds were shipped abroad using fraudulent shipping documents.
Operation Glebe
Prosecuting. The confiscation orders against the 3 Defendants followed a contested hearing lasting a number of days. Orders totalling over 2 and a half million were made. The default periods imposed were in excess of 13 years. Acted alone during the confiscation hearings.
Amritpal Singh Johal
Defence junior in Mr. Johal’s retrial for fraud –the police Operation Ribbon.
Pritchett and others
Prosecuting. The POCA proceedings in this case (the “Cuddles” brothel case, Operation Larman) lead to confiscation in the sum of 2 million. Acted alone in the substantive trial and as a Leading Junior for the purpose of the confiscation hearings.
Simon Taylor
Defending a car trader accused of conspiracy to obtain property (and money transfers) by deception in the police Operation Bolivar. The case involved allegations of over 89,000 pounds worth of cash and other property being stolen. Acting alone.
Tsafack and others
Operation Wandling. Prosecuting a detailed and voluminous investigation into a “black money” conspiracy to defraud which led to two linked trials, five convictions being secured.
Patterson and others
A laundering of criminal proceeds case which is a reported authority on the Proceeds of Crime Act 2002. I acted as Leading Junior and secured convictions against all 4 Defendants, who included an estate agent and a practising Solicitor.
Mudhar and others
This complex international fraud was an investigation by the Serious Fraud Office which led to a 5 month trial in 2003. Hundreds of thousands of pages of unused material had to be digested and marshalled. The case summary alone ran to 92 pages. Led by a Silk. Defending
Davies and Webster
A fraud valued at around 1million whereby the internal “college” of a major telecommunications company was subject to dishonesty by highly-placed executives. Included the use of “dummy” companies and off-shore administration (bank accounts and companies). A Casework Directorate (York) case. Lead by a Senior Junior.
The “Centrex” fraud
The trial in this case lasted several months. It is understood to be the most voluminous case ever conducted by York Casework Directorate. A fraud on the system for awarding NVQs, the Crown alleged that millions of pounds had been lost from the public purse. Lead by a Senior Junior.
Nazham and Nazham
A multi-million pound conspiracy to defraud wherein hundreds of fraudulent bank accounts were set up using a complex network of dozens of false identities. These identities were so elaborately set up that entire companies were fraudulently created to provide employment details. Prosecuting. Led by a Senior Junior.
Appointments
Recorder
Queen’s Counsel
Memberships
Member of the Midland Circuit
Member of the CBA
Qualifications
LLB First Class (Honours) Liverpool University
President of the Legal Society (Liverpool University)
Bar Vocational Exam (Inns of Court School of Law) - Very competent
Recipient of Sir Thomas Moore Bursary (Inns of Court School of Law)
Hardwicke Scholar (Lincoln’s Inn)
Qualified Pupil Supervisor

No5 counsel act for the defence as couple face murder charges
John Butterfield QC and Simon Hunka are acting for the defence in a murder trial in which a couple are accused of killing a homeless woman...


Date: Thu, 14 Nov 2019
Anti-knife crime video features convicted murderer which No5 silks acted on
A convicted murderer making headlines for warning teenagers of the risks of arming themselves with knives was prosecuted by John Butterfield QC of No5 Barristers’ Chambers at his 2015 trial....