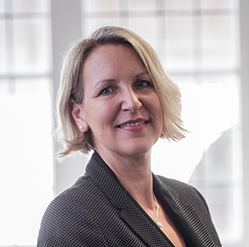 Frances is an experienced advocate specialising in all areas of immigration law, international human rights, asylum, nationality, and administrative law, with a particular focus on deportation and human rights family and private life claims. Frances represents private and publicly funded clients in the Immigration and Asylum Chamber of the First Tier and Upper Tribunals, the High Court and the Court of Appeal. Frances is highly regarded for her ability to engage vulnerable clients; she acts as a Litigation Friend on behalf of adults who lack capacity in the immigration system.
More specifically, Frances’ practice encompasses appeals and judicial review challenges against the refusal and/or decision-making process in the following areas: adult dependent relatives, asylum, bail, business immigration, Civil Penalty Notices (issued for the alleged employment of illegal workers), Turkish business persons, deportation, deprivation of nationality, domestic violence, ETS/TOEIC deception allegations, EEA rights of residence, EEA marriage of convenience allegations, entry clearance, fresh claims, family reunion, long residence, the points based system, right of abode, revocation of indefinite leave to remain, unlawful detention, unaccompanied children and victims of trafficking. Additionally, Frances undertakes judicial review challenges to age-assessments of unaccompanied asylum seeking children and the non-provision of housing etc.
As well as providing written and oral advice, representation and advocacy in all areas of immigration, international human rights, asylum and nationality law, Frances drafts pleadings, further representations, grounds of appeal to the First Tier, Upper Tribunal and Court of Appeal, and judicial review challenges, including grounds and letters before claim, often on an urgent basis.
Frances is also regularly instructed to provide expert oral and/or written immigration advice to family law solicitors, local authorities, courts and the judiciary for use in family court proceedings. As Frances previously specialised in family law, this work particularly encompasses her cross-discipline expertise.
Frances is direct access qualified and accepts instructions on this basis in all her specialist areas.
Recommendations
Frances is a brilliant barrister. Her drafting is clear and persuasive. She has great client care skills. An experienced all-rounder, with expertise in a wide range of immigration matters. A fearless and resilient advocate.
Legal 500 2022
“She is a fighter and she always does the best for the client.”
Legal 500 2021
Her high success rate earned her the title of “invincible barrister”.
Legal 500 2020

Notable Cases
Successful judicial review under section 20 of the Equality Act 2010 on behalf of a profoundly deaf and mute client.
The applicant (who is deaf and mute) sought further leave to remain as a spouse under the five year settlement route. The SSHD refused her application under Paragraph E-LTRP.2.2 of Appendix FM of the Immigration Rules, because it was out of time. The applicant then sought permission to challenge, via a judicial review, the SSHD’s decision, on the basis that her refusal was discriminatory because she failed to make reasonable adjustments in accordance with section 20 of the Equality Act 2010. Following a grant of permission at the oral stage, the SSHD offered to settle the matter, granting the applicant leave to remain on a five year settlement route.
SSHD v Barry [2018] EWCA Civ 790
Led by Manjit Gill Q.C. - Indemnity costs awarded against the Home Secretary after she failed to ‘make good’ her allegation of ‘systemic failure’ by the IAC Tribunals to properly apply IR’s 398 and 399 in foreign criminal deportation cases.
http://www.bailii.org/ew/cases/EWCA/Civ/2018/790.html
MA (Pakistan) and Ors v SSHD [2016] EWCA Civ 705
Linked appeals in which the COA considered when it’s reasonable to remove a non-British child with seven continuous years residence within Paragraphs 276ADE(1)(iv) and EX.1 of the Immigration Rules and s.117B(6) of the Nationality, Immigration and Asylum Act 2002.
http://www.bailii.org/ew/cases/EWCA/Civ/2016/705.html
Rodriguez, Mandalia and Patel v SSHD [2014] EWCA Civ 2
Linked appeals in which the COA determined the ambit of the SSHD’s Evidential Flexibility Policy
http://www.bailii.org/ew/cases/EWCA/Civ/2014/2.html
Barry (conduct of hearing) [2015] UKUT 00541 (IAC)
The President concluded that appeals may be determined without hearing from the Respondent’s representative where the grounds and arguments involve an unmeritorious challenge.
http://www.bailii.org/uk/cases/UKUT/IAC/2015/541.html
R (on the application of Singh and another) v SSHD [2015] UKUT 134 (IAC)
challenge against certification of a long-residence application
http://www.bailii.org/uk/cases/UKUT/IAC/2015/134.html
Memberships
Immigration Law Practitioners’ Association
Bar Pro Bono Unit

Permission granted to judicially review the Secretary of State’s refusal of British nationality where a conviction is ‘spent’ at the date of application
Permission granted on the papers to challenge on grounds of irrationality, unlawfulness and unreasonableness...