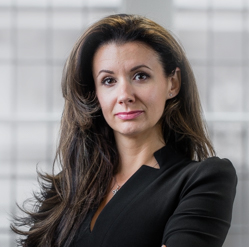 Denise’s practice focuses solely on personal injury law and she regularly advises and appears for parties in fast and multi-track claims. She has considerable experience in claims arising from road traffic accidents, employer’s liability, public liability, occupier’s liability and industrial disease. She has a particular interest in claims involving fraud and associated issues relating to causation, fundamental dishonesty and low velocity impacts. She appears in Courts across the country, and regularly in both Birmingham and London.
Denise cross-qualified to the Cayman Islands Bar in 2012, where she practiced as an attorney for 5 years. As an attorney, she undertook the equivalent duties of both solicitor and barrister in conducting litigation, and she now draws on this experience to provide comprehensive assistance to both her professional and lay clients. During this time abroad she undertook cases involving high-value personal injury, commercial, financial services and costs disputes. She represented Claimants who had suffered catastrophic injuries, including traumatic brain injuries, and obtained settlements in a number of cases around or in excess of US $1 million. She regularly appeared in the Grand Court, Financial Services Division and on several occasions in the Court of Appeal. Much of the work that she undertook included international aspects and many cases involved cross- jurisdictional proceedings. She developed her interest in fraud by acting in a number of very high-value financial cases relating to trusts and share transfers involving allegations of fraud, with associated international civil and criminal investigations and proceedings
Notable Cases
T. FARRELL and C. FARRELL v. BODDEN [2013 (2) CILR 411] GRAND COURT (Quin, J.)
Denise acted as lead counsel against silk, for two Claimants in a road traffic trial heard in the Grand Court where both liability and quantum were disputed. Live evidence was received at trial from experts in forensic engineering, reconstruction, neurology, neuropsychology and orthopaedics. There were substantial claims for loss of earnings, pension loss, past and future care and past and future medical treatment. She successfully obtained Judgment for the Claimants for a total gross award in excess of US $1.7 million.
Judicial Review
GOVERNOR v. INFORMATION COMMISSIONER [2013 (2) CILR 421] GRAND COURT, CIVIL DIVISION (Moses, Ag. J.)
Denise represented the Information Commissioner of the Cayman Islands in two sets of judicial review proceedings brought by the Governor of the Cayman Islands, heard before The Honourable Lord Justice Moses. This was the first judicial review of a decision by the Information Commissioner and the first time the Court had considered the Freedom of Information Law in the Cayman Islands. This case involved matters of national importance and complex issues relating to statutory interpretation, defamation law and consideration of international public law legislation and authority. The judicial review related to highly sensitive documents produced during Operation Tempura, an investigation into allegations of corruption in public office including the judiciary, in the Cayman Islands, and the hearing was conducted partly in camera. The Judge found in favour of the Information Commissioner that the Law provided no exemption from disclosure for documents containing defamatory material. The Governor ultimately accepted the Information Commissioner’s ruling and recognized the obligation to release information in accordance with the Law.
Costs
CVC/OPPORTUNITY EQUITY PARTNERS LIMITED v. DEMARCO ALMEIDA [2013 (2) CILR Note 5] GRAND COURT, CIVIL DIVISION (Henderson, J)
Successfully represented a recipient party in a costs / taxation review where just under US $700,000 was awarded in costs. The taxation arose from complex financial proceedings which were heard by the Court of Appeal and the Privy Council. The Court provided important costs principles on issues including the application of the Grand Court (Taxation of Costs) Rules 1995, indemnity basis taxation, the Practice Direction relating to the taxation of costs and the recoverability of interest on costs (establishing the allocator rule in the Cayman Islands).
Memberships
Gray’s Inn (Major Bedingfield Scholar 2002)
Personal Injury Bar Association
PIBA representative on the Bar Council Working Group on Wellbeing
Qualifications
LLB Hons (Exeter) 2001
Bar Vocational Course, Nottingham Law School, (Very Competent), 2003
Bar Admission- England and Wales 2003, Cayman Islands (Full Admission) 2012
Other Information
Background
When not practicing at the bar, Denise enjoys photography, having previously worked as a professional underwater photographer whilst living in the Bahamas. Her images have been published and featured in advertising campaigns. Denise is also a keen SCUBA Diver, having qualified as a PADI Instructor over 18 years ago.