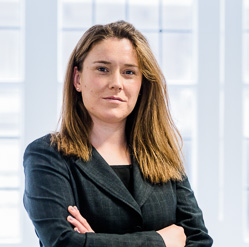 Avril has successfully appeared before the Parole Board seeking release of prisoners serving indeterminate sentences and regularly advises on behalf of prisoners in judicial review challenges to decisions of the Parole Board and the Secretary of State for Justice, including decisions concerning release, recall, and the provision and prioritisation of oral hearings
Avril also accepts instructions to represent prisoners at hearings before Independent Adjudicators and more generally in relation to alleged breaches of Article 8 of the ECHR.
Avril has a keen interest in actions against the state and has advised in false imprisonment claims against the police and the Home Office, which have resulted in financial settlement.
Previous experience
Avril has gained extensive experience in the field of public law and human rights. Avril has worked in human rights NGOs and legal advice centres in Germany, Bolivia, the UK, and the Netherlands, including the AIRE Centre where she advised on family reunification and the Citizenship Directive. Through this work, Avril has developed skills for dealing with vulnerable clients, particularly in the fields of LGBT rights, immigration and asylum, access to healthcare, anti-discrimination, and violence against women. Before joining Chambers, Avril taught in the LL.M programme at the Walther Schücking Institute for Public International Law.
Avril is contactable out of hours and is always happy to assist charities and NGO’s on a pro-bono basis.
Avril speaks fluent Irish and German and has a working knowledge of French and Spanish.
Notable Cases
Mr. W v SSHD
Avril successfully negotiated a settlement on behalf of an EEA-national who had been unlawfully detained
Mr. D v SSJ
Along with Philip Rule, Avril successfully secured the urgent executive released of a vulnerable recalled prisoner and negotiated a significant ex-gratia sum settlement.
Memberships
Secretary of the Human Rights Lawyers Association
Executive committee member, Inner Temple Junior Bar Association
Qualifications
LLB Law and German Trinity College Dublin
LLM Public International Law University of Amsterdam
MSc. European Integration and Development Vrije Universitat Brussels (Free University of Brussels)
PhD Candidate Walther Schücking Institute for Public International Law, Germany