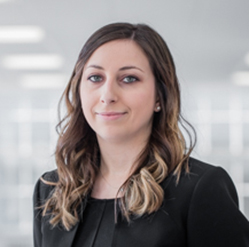 Arrin is a barrister specialising in family law, with a particular emphasis on private and public children proceedings. She has appeared at all levels up to and including the High Court and has been led by Queen’s Counsel.
Arrin is a tenacious and resilient advocate, who works hard to achieve the best possible outcome in each case that she handles. Her personable approach enables her to build an immediate rapport with those she represents and ensures that she understands and deals with the key issues of the case.
Arrin is accredited under the Direct Access scheme and welcomes instructions directly from members of the public in appropriate matters.
Private children law proceedings
Arrin has significant experience in private law disputes about a child’s living arrangements and/or who they spend time with. She has appeared in cases of legal and factual complexity, including those involving vulnerable parents, domestic abuse, high conflict intractable disputes and Rule 16.4 Guardian appointments.
Public children law proceedings
Arrin is experienced in public law matters and frequently represents local authorities, parents, children and other interested parties in care proceedings. Her caseload has involved suspected neglectful parenting, physical, emotional and sexual abuse, substance misuse, non-accidental injuries and radicalisation issues.
Family Law Act proceedings
Arrin regularly receives instructions on serious Family Law Act applications, including Non-Molestation Orders and Occupation Orders. She understands the sensitive nature of such cases and has a reassuring client manner.
Notable Cases
A Local Authority v A Mother and Ors (Fact-Finding) [2018] EWHC 2054 (Fam)
Appeared as Junior Counsel for the mother at a 7 day finding of fact hearing in care proceedings in the High Court. The court was concerned with the risk of radicalisation with regard to a family who had travelled to Syria and lived in territory controlled by the Islamic State, before returning to the UK.
Awards
Leonard Woodley Scholar, Inner Temple, 2016
Winner, Birmingham Law Society Debating Competition, 2014
Winner, University of Law Debating Competition, 2014
BPTC Exhibition Award, Inner Temple, 2013
Lady Barber Prize for Mooting, University of Birmingham, 2013
Mistress of the Moots, University of Birmingham, 2012-13
Lady Barber Prize for Mooting, University of Birmingham, 2012
Winner, Camm Cup Mooting Competition, University of Birmingham, 2012
Memberships
Honourable Society of the Inner Temple
Midland Circuit
Qualifications
BPTC, University of Law Birmingham, 2014
LLB, University of Birmingham, 2013