Agoraphobic defendants use video links from home during court trials

The use of a video link from home for agoraphobics facing a court hearing is a major step forward in the pursuit of justice, according to an experienced Birmingham barrister.

Gerald Bermingham, of No5 Barristers’ Chambers, said he has been involved in two criminal trials in the past few weeks, in which a video link was used. He says it is the first time he has known this system help people struggling with the debilitating condition.

Agoraphobia is the fear of open spaces or of being in crowded, public places and is often associated with leaving somewhere safe, such as home. People who have the condition feel very vulnerable if they have to leave their ‘safe place’ which can lead to panic attacks.

Mr Bermingham, who used to be a Labour MP in the North-west and has worked as a barrister for more than 30 years, acted for the prosecution in a case heard at Hereford Crown Court and for the defence in a case at Birmingham Crown Court.

He said: “The use of video links is a fairly new idea and has been used for sentencing in the past, but it has been developed now for agoraphobics and it is an innovative method of dealing with those who are severely handicapped in this way.

“In the past, we have had to drag agoraphobics to court, which in turn creates a real anxiety and tension for them and does not give them the freedom to portray their case properly when being questioned. However, by being in their own home, it enhances that feeling of calm and security, and greatly affects the quality of their evidence.

“This is really an important development, as it opens up opportunities for people with other complaints and disabilities in both criminal cases and civil actions and means justice is opened up for everyone.”

Mr Bermingham added: “The sight of someone being wheeled into court has always concerned me and this system opens up the possibilities of helping paraplegics, for example,  as well as people who may have to give evidence from a hospital bed.”

The video link relays the image of the defendant to a flat screen monitor within the court room, whilst a monitor is also used at the defendant’s home showing the court in session.

During both trails, the defendant was joined by a solicitor and court official at their home.

Mr Bermingham added: “In the Birmingham case, I defended a severe agoraphobic and was able to pose questions as if he was back in the court, on trial in front of the judge. The video engineers were not even in the same room, which made the situation even more calming for the defendant. It is a much welcomed and innovative development.

“For this system to be utilised during a trial, the condition has to be established by a psychiatric report and legal counsel need to make an application for it to be used.”

Gerald served as MP for St Helens for 18 years and during that time played a leading part on the Home Affairs Select Committee. He has served at the committee stage of numerous criminal justice bills and other judicial measures.

As both a solicitor and a barrister, Gerald has specialised in criminal law and has prosecuted at a senior level. He has appeared on behalf of the defence at all levels and led in a number of murder, fraud, drugs, duty evasion and money laundering cases.

He is a member of the Criminal Law Group at No5 Barristers’ Chambers. To read his profile visit: https://www.no5.com/barristers/barrister-details/149-gerald-bermingham/ 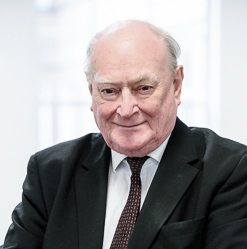